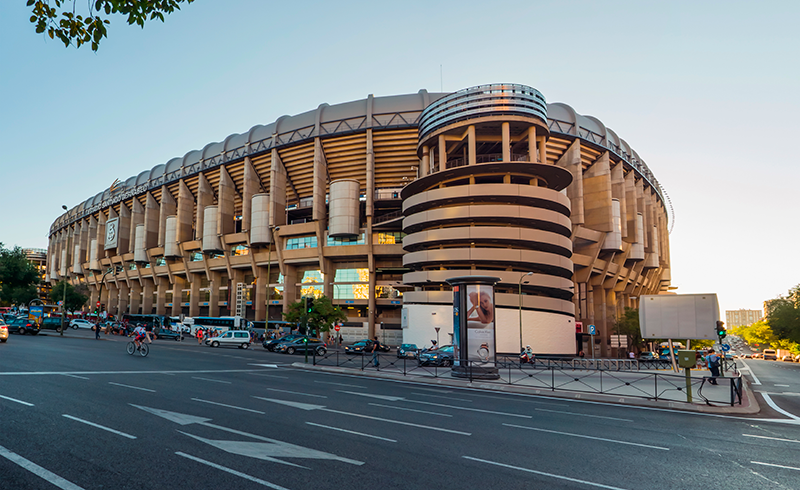 With Real Madrid, Atlético de Madrid, Getafe, Leganés and Rayo Vallecano competing in the same category this season, Madrid is the city with more teams at the top professional division of the Spanish football league system. In fact, it is one of the European cities with more teams in the top league, only outnumbered by London, which has six teams contesting the Premier League.

Football is one of the most massive and popular sports in the world and, in recent years, a new tourism form – football tourism- has arisen, luring thousands of fans to the cities with the best teams to enjoy a game, visit the stadium or just to experience firsthand the atmosphere surrounding an important match and live the celebrations in the city after the team’s victory. If you are a football lover, Madrid provides you with the opportunity enjoying your passion in different ways.

From your apartment at Génova 5 and in less than half an hour by car, you can get to any of the five stadiums where top level matches are being played this season: it will only take you 10 minutes to get to Santiago Bernabéu, Real Madrid’s stadium, driving up Paseo de la Castellana. The new Wanda Metropolitano, home to Atlético de Madrid, is about 15 minutes east, while you will have to drive more or less the same distance, but southwards, to get to Getafe’s Coliseum Alfonso Pérez. Estadio Municipal Butarque, Leganés’s headquarters, is 20 minutes southwest and Estadio de Vallecas (Rayo Vallecano) 15 minutes southeast. See LaLiga Santander’s official schedule to check dates and times of games during your stay in Madrid. Besides, Atlético de Madrid and Real Madrid are contesting the Champions, so you may have the opportunity to enjoy a good European match live. Visit the teams’ Websites for details on tickets.

If you fancy visiting the stadiums of the most international teams in Madrid, you can do it with Tour Bernabéu and Wanda Metropolitano Tour. Both visits can be done in guided or non-guided tours to discover all the corners of the stadiums, from the pitch to the changing rooms, without forgetting their museums, full of history and mementos. And if you are into football museums, you can’t miss the Spanish National Team Museum, within Ciudad del Fútbol de las Rozas, where you can admire, among many other objects, the World Cup trophy that The Reds won in 2010.