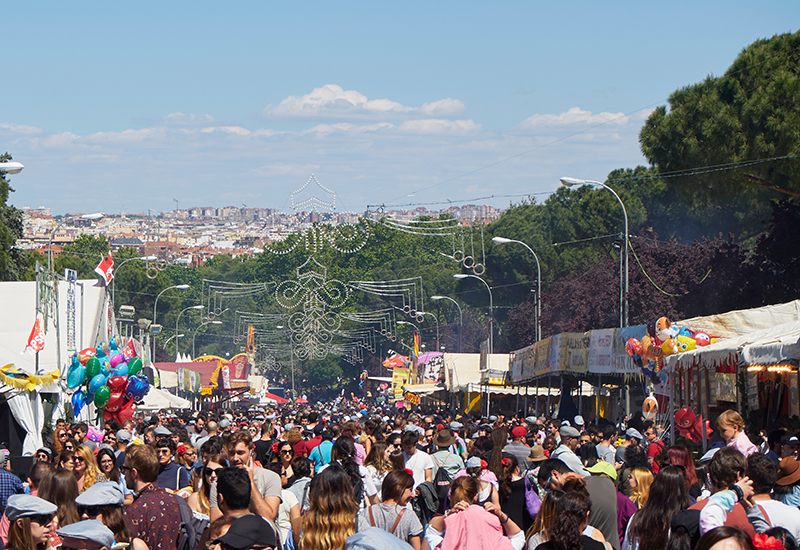 Between the 10th and the 19th of May, the people of Madrid honour their patron saint, San Isidro Labrador (Isidore the Farmer), with a series of events that include religious acts, concerts and other shows and lots of open-air fun, enjoying the gastronomy of the Spanish capital city.

San Isidro (Madrid, 1082-1175) was a farmer known for his kindness to animals and to the needy and for his knack for finding water. He is said to have made several miracles in his lifetime: by praying, he got two angels to do the ploughing for him, saved his donkey from a wolf attack and prevented his son from dying in a well by rising the sea level, and, by showing his piety towards groups of pigeons and hungry people he multiplied food several times and could feed them all. Besides, by banging the ground while ploughing he made a spring gush where a hermitage in his honour would be later built. After his death, other miraculous actions were attributed to him, for example, he is said to have appeared before Alfonso VIII to show him the path to surprise the Moors and win the Navas de Tolosa battle and to have cured Philip III of a deadly illness. After this miraculous healing, the king started the process for his beatification, which ended with the Saint’s canonization in 1622. His body, found in a state of incorruptibility 40 years after his death, is kept at San Isidro church (a 30 minutes’ walk from Génova 5), inside a sepulchre with nine locks whose master key is kept by the King of Spain.

San Isidro’s Day is held on May 15 and the previous and following five days are a perfect time to visit the city, due to the comprehensive cultural programme of the festival. Celebrations start officially with an announcement at Plaza de la Villa (near Plaza Mayor) in the evening of the first day, although by then the troupe of gigantes y cabezudos (giants and big-headed figures) has already paraded around the main streets of the city for the first time during these days. From then on, the evenings are full of music, with zarzuelas, comic operas, pop and rock concerts, open-air dances and people of Madrid dancing chotis dressed up as chulapos. On May 15, celebrations start with a mass in San Isidro church, the starting point of a light-hearted pilgrimage to Pradera del Santo. In this big park, the faithful drink water from the spring near the hermitage and have a picnic, enjoying typical dishes such as stew, chitterlings, Spanish omelette and ring-shaped pastries. A great fireworks display in the Retiro Park is the final touch to the festival.